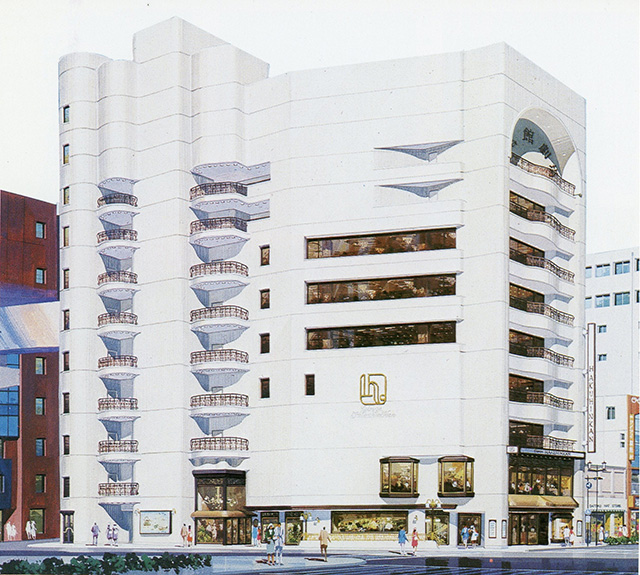 The name of Hakuhinkan had been popular from the Meiji period to the beginning of Showa era as a specialty of Ginza, which was "Teikoku Hakuhinkan Kan-koba". In 1899, Hakuhinkan was opened in Ginza 8-chome as the seventh kan-koba, which was a former style of department store. While other kan-kobas were all two-story buildings, Hakuhinkan was a Renaissance style three-story building made of bricks with a clock tower on the roof. The large 120cm diameter clock with illuminated dial and the beautiful sound of the music box entertained the people in Ginza very much at that time. The stairs of Hakuhinkan was not regular but a novel structure, where people walked around a loose spiral passage. Then it rapidly became popular and it recorded the best sales in Ginza. The total number of the tenants reached 70 shops, including clothing shops, kimono shops, cosmetics and accessory shops, lacquerware and parquet stores, toy shops etc.

The kan-koba in Ginza came to the peak in 1902, but began to decline from the following year. Thus, Hakuhinkan got the last kan-koba and was operated even in Taisho era. It was closed temporarily in 1920, but it was renovated from three-story building to a four-story building in 1921 and equipped with an elevator for the first time among the stores in Ginza, which made it popular.

Also, the new coined word "department store" used at that time was the first one in Japan, so it became a hot topic. However, this building was destroyed at the time of the Great Kanto Earthquake in 1923. We rebuilt the building after the earthquake and restarted operation, but we gave up operating the department store business in 1931 and closed the store once. After that, we reconstructed Hakuhinkan as a rental building. Then, after much more changes, in commemoration of the founding 80th anniversary, we newly built a ten-story building with a transparent elevator in the center part of the building, and a spiral staircase in tortoise shell shaped floor configuration in October 1978. And we located the merchandising department on the 1st to the 4th floor, restaurants on the 5th to the 7th floor and the theater department, "Ginza Hakuhinkan Theater" on the 8th to the 10th floor.

After that, in September 1982, we opened the goods selling department as "Hakuhinkan's TOY PARK" as a toy specialty shop.

ADACHIGAHARA - Connecting the classic to our contemporary world –
26 Jan 2022